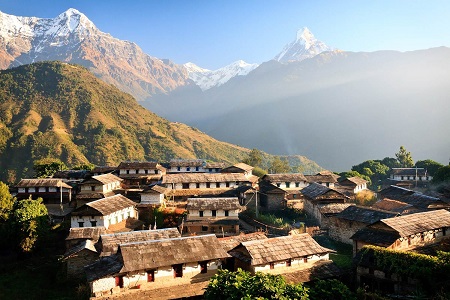 Nepal, back in the early 20th century, was a country that was closed to anything Christian. It prohibited the entry of any group or person who espoused the name of Christ.

For years this was an ongoing problem because the only groups willing to come into the country and provide what the government needed, were Mission groups.

Finally, the government relented, with this proviso. To lead someone into Christianity was forbidden and made into a severe law.

Anyone who became a Christian would be thrown into prison for three years. Prison was harsh. It’s not like prisons here, but rather the person’s friends and family were to provide food, clothing, and medicine. Otherwise, the prisoner would perish.

Any missionary who led someone to become a Christian would be ejected from the country.

So, in short order, many Christian groups, missions, and organizations sent their people into Nepal with stringent instructions to not place any of the people at risk. There were to be no conversions.

These Christian groups couldn’t do all of the work themselves, they needed local people to assist. And at each location, people lined up to obtain work, and to be paid for their labors.

The man was counseled about the results of turning to Christ. He would be thrown into prison and may never come out. The Missionaries explained the hardship this would place on his young wife and children. They would have no support but would be required to support him.

The man said he understood all of this. He had discussed this with his wife, and she agreed with him. He wanted to become a Christian. Nothing the Missionaries could do would dissuade the man; he was determined to become a believer based upon the way these foreign Christians lived.

And so, the man was baptized.

Between the times the man accepted Christ and when he was arrested by the police, the Missionaries taught the man about living for the Lord and numerous verses of scripture. He memorized as much as he could.

He was eventually tried, found guilty and sent to one of the harshest prisons in the land.

The missionary was expelled.

This man told them that he was in prison because he was a Christian.

‘What’s a Christian?’ they asked.

He told them, and they listened. In jail, he lived the life of Christ as he had been taught and he shared the scriptures he’d learned.

Some of the other inmates in that Prison observed this man and they saw the difference in his life. They too wanted to become Christians.

Now the authorities had a problem. What were they to do? They couldn’t throw these other men into jail because they were already incarcerated.

And so over time, these new believers learned the ways of the Lord, and when they were released they returned to their homes. People in these remote villages noticed the changes to the released man and they asked him, ‘Why are you different?’

He answered, ‘Because I’m a Christian.’

The asked, ‘What’s a Christian?’

More people came to know to Christ and they were thrown into Prison.

And the cycle was repeated. “Why are you in prison?” “I’m a Christian.” “What’s a Christian?”

In the 2000s, the number is somewhere between half a million to one million Christians. Christianity in Nepal is still growing