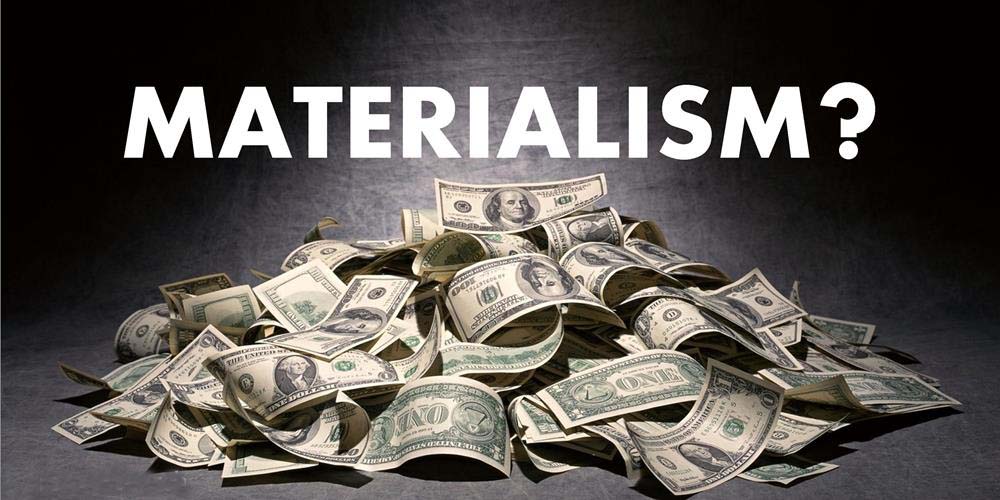 Materialism is all about the physical

The world, and everything is physical

Everything around us pertains to the physical

We live in a world made with physical stuff. In the beginning, God created the heavens and the earth

All our lives the things around us besiege us, clamoring for our attention; and it becomes easy for us to be pre-occupied with things.

Materialism can also be defined as:

If you and I are honest: We’re preoccupied with things. We want to acquire and control things.

Because we live in a physical world, it’s mighty-easy for us to think (and believe) that things are important

But they are not

God has other, more important, purposes for us

Today, the United States is the wealthiest country in all of history

Because God uses wealth as a test… He’s testing our society.

Why? Because He tests us to determine how we respond to the responsibility of handling our wealth

Maybe you’re saying to yourself:

“Who are you comparing yourself to?”

Why do you think that people around the world, are trying to get into this country, both legally and illegally?

They see the wealth we possess. They want the things we have

If you visit third-world countries, you’ll find people living on $200 per year

Could you live on that? No, not with your current lifestyle.

To those people, you and I are as rich as:

You and I are filthy rich. To them, we are sickly rich

Those people believe we have no bottom to our checkbook

To them we look like a million bucks, but… “We are green and wrinkled:

Does that anology help understand the difference?

Many in the world think of Americans as…

We have things (materialism)

This is something we fail to notice because… we’re part of the culture.

Central to this mindset is our yearning for the pursuit of personal pleasure, personal comfort, personal gain, or personal glory.

Consumption (greed) drives the process we use to make our decisions

This type of thinking feeds selfishness which is: the unquenched thirst for ‘more’ and a lust for things

This consumption becomes an unhealthy craving for things (materialism)

All around us are advertisements. Consider: Where can you go without being confronted by billboards, signs, posters, commercials, or internet soundbites. This year, we’re in a political environment.

Our culture remains saturated with the expectation of multiple ways to achieve prestige and social standing.

We often equate prestige and social standing as… Benchmarks for Success

1 Timothy 6:10 For the love of money is a root of all kinds of evil, for which some have strayed from the faith in their greediness, and pierced themselves through with many sorrows.

What matters is: What do you do with your stuff

Everything belongs to God. We don’t actually own anything

Proverbs 30:8-9 … Give me neither poverty nor riches—Feed me with the food allotted to me; Lest I be full and deny You, And say, ‘Who is the Lord?’ Or lest I be poor and steal, And profane the name of my God.

If I’m rich, I’m liable to turn my back on God If I’m poor, I might steal from others

Job 1:21 Naked I came from my mother’s womb, And naked shall I return there.

1 Tim. 6:7 For we brought nothing into this world, and it is certain we can carry nothing out.

Psalm 49:16-17 Do not be afraid when one becomes rich, When the glory of his house is increased; For when he dies he shall carry nothing away; …

Ecclesiastes 5:15 As he came from his mother’s womb, naked shall he return, To go as he came; And he shall take nothing from his labor Which he may carry away in his hand.

Scripture specifically states that anything in this physical world, including all the stuff, all the honors, all the accolades, all the praise, all the fame, all the notoriety, all the glamor, all the importance: all of that… we cannot take with us when we leave this life.

Mother Mary Angelica – founder of the Eternal Word Television Network said: It is not so much the possession of things… it is the burden these things impose—the fear of loss, the greed for more, the power they exert, the glitter that is so bright for so short a time.

We know from scripture that we are Stewards

We are admonished to use our things for God’s glory

We are stewards (managers) of things (stuff) not owners

Can this be proved? Yes, because we can take nothing with us

2 Peter 3:10 But the day of the Lord will come as a thief in the night, in which the heavens will pass away with a great noise, and the elements will melt with fervent heat; both the earth and the works that are in it will be burned up.

Matthew 13:40 *Therefore as the tares are gathered and burned in the fire, so it will be at the end of this age. *

If the physical world and all the things that we handle, hear, smell, taste, and see every day;

If they have little value, therefore, we are living in a world that is temporary and disposable

If that’s true, then what IS REALLY important?

Things are not the all-to-end-all. They’re temporary

We’ve been told when we die, we can take nothing with us.

I disagree. We do take something with us

If we are talking about physical things, I would agree that we can’t take anything with us

But keep in mind that learning isn’t physical

Therefore, when we die, we’ll take with us the things we learned.

John 4:24 God is Spirit, and those who worship Him must worship in spirit and truth

Galatians 5:22-23 But the fruit of the Spirit is love, joy, peace, longsuffering (patience), kindness, goodness, faithfulness, gentleness, self-control. Against such, there is no law

When we die, we will take with us any learned character traits

Matthew 5:12 Rejoice and be exceedingly glad, for great is your reward in heaven,

Matthew 6:4 that your charitable deed may be in secret; and your Father who sees in secret will Himself reward you openly.

Matthew 6:6 & 18 …and your Father who sees in secret will reward you openly.

Matthew 16:27 *For the Son of Man will come in the glory of His Father with His angels, and then He will reward each according to his works. *

Luke 6:23 Rejoice in that day and leap for joy! For indeed your reward is great in heaven…

1 Corinthians 3:8 Now he who plants and he who waters are one, and each one will receive his own reward according to his own labor.

1 Corinthians 3:14 If anyone’s work which he has built on it endures, he will receive a reward.

Colossians 2:18 Let no one cheat you of your reward…

Hebrews 11:6 But without faith it is impossible to please Him, for he who comes to God must believe that He is, and that He is a rewarder of those who diligently seek Him.

God promises rewards for the traits we take with us (learning)

What have you learned? What character traits have you acquired?

If you are living for stuff, and glory, and praise, and notoriety, and fame, and approval, and acclaim, and production, and wealth, and …

To be living for God (Eternalism) means: to be responsible for our stuff and…

to be humble (in attitude) during our brief, and limited stay on earth

Contrast the following: God’s eternal viewpoint about our true worth compared with:

To have an attitude marked by thanksgiving, by worship, and a deep appreciation for God’s generosity…That signifies a believer who embraces an eternal view

Such a lifestyle reveals devotion to the One “From whom all blessings flow.”

**At the start of all things: ** God created the heavens and earth

At the end of all things: But the day of the Lord will come as a thief in the night, in which the heavens will pass away with a great noise, and the elements will melt with fervent heat; both the earth and the works that are in it will be burned up.

All our stuff will be burned up

Also, by thinking that, you could be kissing your rewards good-bye

This brings us to a few questions:

Jesus said: it is more blessed to give than to receive