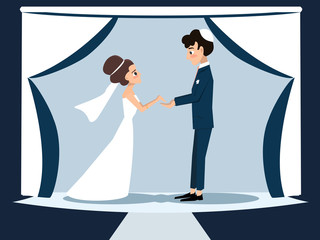 In ancient times, generally, the fathers of the prospective bride and prospective groom arranged the match. The girl may have been consulted and was expected to give verbal assent, but her part was a mere formality. The negotiations and conclusion were set by the fathers.

The father of the boy was expected to pay for the girl whom his son would marry. This was the mohar or dowry. The father of the girl would receive this dowry for his daughter. This payment was not always in money but sometimes would be paid in kind, or service. This would be the purchase price of the bride-to-be. It is necessary to understand that a marriage was not an agreement between individuals, but between two families.

Because of the marriage contract, the daughter would be leaving her father’s home, and be added to the boy’s home. It was reasonable that the father of the groom pays the father of the bride the equivalent of her value as a useful member of the family.

Any marriage in the Bible would consist of two rituals marked by celebrations at two different times. There would be an unknown interval between these two events, sometimes lengthy, like a year or two.

The first ceremony involved the young man going to the house of the girl, bringing a large sum of money for the Bride Price, a contract with promises to the Bride, and a skin of wine. If the girl’s father approves, the girl is called and they all drink the wine. This is where she commits herself to the young man. At this betrothal, the woman was legally married even though she remains in her father’s home. She could not belong to another man unless she was divorced from her betrothed man.

During the interlude between the two ceremonies, the groom would return to prepare a room in his father’s house for the new bride. This period for the girl and boy was called ‘betrothal’. Mary and Joseph are prime examples (Matthew 1:18; Luke 2:5). The boy, if asked when his wedding would be, often would answer, ‘No man knows, the day or hour, only my father knows.’

The girl remains in her father’s home and learns how to be a wife and to please her husband. She and her betrothed may have secret messages pass between them, but never openly. Often a messenger, or a go-between, would deliver private notes.

When the young man and his family are ready, the next ceremony may proceed. The groom chooses two close friends to help him and the bride during the ceremony. These two are called ‘witnesses’.

The groom comes for his bride (who does not know when, because it must be a surprise) with great fanfare, trumpets, his servants and friends and family. The groom’s father gives the final approval for the time of the wedding. It is a joyful day when he comes to receive his bride. There is music, dancing, and rejoicing. During the ceremony, the contract, which contains the groom’s promises to his bride, is handed to the parents of the bride.

On their wedding day, the couple is said to stand without spot or blemish. A banquet would be held for seven full days of food, music, dancing, and celebration. Then the new couple takes residence in their new quarters.

Have you noticed the close connection between a Jewish wedding and when Jesus Christ comes for His bride, the Church?

The Church, a gentile bride (like in the book of Ruth), has been promised to Christ. The Lord has paid the bride-price (His blood), has promised to prepare a place for His bride in His Father’s house (John 14:2), and ‘no man knows the day or the hour’ of His return, only the Father (Matthew 24:36). There will be a period of ‘seven’ (years) where there will be a banquet of celebration and the church/bride takes up residence in the new residence (Revelation 16:6-9).

The phrase ‘no man knows the day or the hour’ is a catch-phrase for the Feast of Trumpets. Many Bible scholars have associated the Feast of Trumpets with the Church rapture. Both have uncertain starting dates that the Father determines. This Jewish feast is in the fall of the year, sometime between September 5 and October 5. This celebration is the traditional anniversary of the creation of Adam and Eve, the first man and woman. OT Jewish Marriages