My Journey to Faith In Jesus Christ 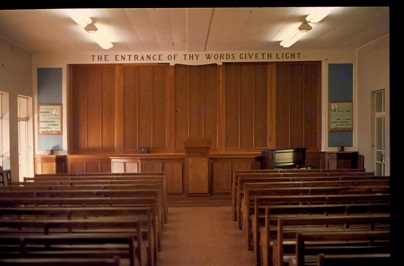 “Mom, do I have to go to church?” My stomach tensed at even considering the unthinkable. Attending services, a staple in the Emmert household, though not commanded, was none-the-less a requirement. Mom would be the easier parent, but broaching the subject took every bit of my gumption. Seeing Mom’s eyes cloud over made me wish I’d never spoke.

“Are you sick?” Concern tinged her voice as she placed a hand to my forehead.

“I just don’t want to go. It’s boring.” A knot cramped my belly and I was ready to bolt. My head hung and I refused to look at her.

“What brought on this?”

It was a question I didn’t want to answer. “Never mind.” I spun and exited the kitchen, returning to the upstairs room that I shared with my brother. Would Mom follow? I lay across the bed, listening for footsteps, but heard nothing. I stared out the window. She’d tell Dad. Would I be in trouble?

What was the use of church? It was uninteresting. I did most good things that the preacher said everyone must do. But why was it important to read the Bible, or to pray? My friends attended services. Were they forced to go like me? Youth group was the only fun service. The memory of Mom’s dark frown quelled all thoughts of further defiance. I’d maintain the façade and smile at the Pastor and carry my Bible and act like loved being there. But something had to give.

In 1964 a caravan from our church trekked to Omaha’s Ak-Sar-Ben to witness the growing popularity of Billy Graham. My parents drove, therefore my attendance was mandatory. Many desired to hear this man preach. I didn’t.

For a nice evening, I fidgeted through beautiful singing and entertaining guests. When the man took the podium, my discomfort increased like a plunge over a waterfall. The main points rang clear: mankind possesses a sinful nature, all have sinned and cannot not get to heaven on their own, and only by Jesus can salvation be received.

The music started, the choir sang Just As I Am, and the invitation presented. I sat gripping my seat, resolute, and fighting the pull to walk forward. The tug-o-war waged a mighty battle but my persistence won.

Traveling home, someone said others in our church had gone forward. But I hadn’t. Our car was moving in the right direction, away from Rev. Graham. A niggling thought came to mine and I wasn’t quick enough to bury it. I’d said no to the preacher and no to God. Would I be damned? I wanted my uneasiness to disappear.

Over the weeks it frittered away, and school activities weakened the message.

The autumn after graduation, I headed for college. Overnight the pressure to attend church lifted, and I took full advantage of the freedom, reserving Sundays for sleep, chess, and playing bridge. Except for visiting home, I never attended services. God wasn’t part of my life, and with any luck, He never would.

The following year I switched colleges to a less crowded and cheaper institution. Even with reduced costs, my pocket money proved scarce, forcing me to find work. After loading Thanksgiving turkeys onto a truck, I was hired at a family diary farm.

It took me exactly one week to learn the family was serious in their faith. Though I didn’t cuss, drink, smoke or screw around, which was good in their eyes, neither did I go to church, read the Bible or pray. For two years they cajoled me to attend. I declined, and tried to leave it at that. They continued to persist.

Some of my farming tasks weren’t completed until after dark, which made me late to the school cafeteria, so the family invited me to eat with them. Over time we developed a relationship. I felt like they’d adopted me, and I spent more time working so I could eat the home-cooked suppers. I enjoyed their friendship, thereby putting up with their churchy attitude.

I met a girl at school and we began dating. After a couple of years, I thought we’d become Mr. and Mrs. She had other plans and broke off. I wanted to crawl into a hole and hide.

My studies were doing okay, though classes were still tough. After two failed tests, a warning from a professor, and an incomplete project, escaping to Montana looked mighty appealing.

Back at the dorm, gags and practical jokes took their toll. The guys pestered me until I wanted to slug them. Anger, never far from the surface, turned my quiet demeanor into a ready-to-erupt boiling pot. Someone recommended I get counseling. I refused. I could handle things, I was a tough guy. At the same time, I feared losing control. My fist wanted to re-arrange my roommate’s teeth. My foot wanted to put a hole in the door. The volcano rose higher to the surface.

My thoughts battled my emotions. My churning feelings neared the winning marker. Professional establishments were closed on Sundays. I didn’t know a pastor. My dorm mates were part of the problem. Who could I turn to? The farm family flashed into my thoughts, and I made the call.

I arrived at the farm, and was met by the wife.

I unloaded and didn’t stop talking for an hour. She listened, with an occasional question, while I dumped my problems, frustration, bitterness, and anger. She accepted my sordid story without blinking.

I paused to take a breath and she asked, “What do you want from me?”

Our eyes met. She studied me until her gaze made me uncomfortable. “What about tomorrow? Will your problems still be there?”

I didn’t reply. My emotions were vented, not solved. Nothing had changed.

“Mike, are you a Christian?”

What? I’d been taught the Bible. Other people did horrid stuff. I was a good guy. “I was raised in a church.”

My chair felt like nails, my shoes burned like fire, my head spun like a windmill. I needed to get her off my back. “No! I’m not.”

“If you could wave a magic wand, what would you wish?”

“My problems would go away.”

“Seek ye first the Kingdom of God and all these things shall be added unto you.”

I didn’t know where that verse was found, but my uneasiness jumped a notch.

“Mike, you must come to God. Let Him take your troubles. I can’t do anything for you. He can.” She paused. “Hold on a moment. I’ll be back.”

Had I spoken too much? Had I revealed too much of my private thoughts? My mind jumbled into a confused mass of spaghetti.

She returned a few minutes later, carrying a Bible, and opened it.

A torrent of wicked words filled my head, and I wanted to curse, wishing the worst upon that book. Never before, nor since has such a flood of hatred come over me. My eyes drew to that book, yet I wanted to be far away from it. I couldn’t move as my mind in filled with vile agitation against the Bible.

She read a number of passages, and I could only listen, wishing my ears didn’t hear, wishing my feet weren’t tractor weights. “Are you a sinner, Mike? These verses say you are.”

My throat constricted, and it took two tries before I squeaked, “Yes.”

“God requires punishment for sins. You can receive judgment, or accept Christ’s sacrifice.”

On one side I viewed the fires of hell. On the other, Christ waited.

She flipped to a passage near the end of the book. “Behold, I stand at the door, and knock: if any man hear my voice and open the door, I will come in to him, and sup with him, and he with me.”

It was an invitation. Did I want Christ to come in?

A waterfall spilled out of my eyes, and poured down my cheeks, as I bawled.

She waited, not criticizing or condemning. When I stopped, she asked. “Will you accept Christ?”

She led me in a prayer and for the first time I talked to God, not at Him. He was in the room. My anger evaporated, my hatred vanished, and contentment settled over me. He would help me with my problems, and time proved that correct. Everything was the same, yet everything was different.

Since then I talk to God anytime during the day, and it seems natural. Why hadn’t I seen this before? I received Christ on Sunday. Tuesday I met folks introducing me to mission work. Friday I dated the wonderful woman who would be my wife. God was working.